On the Camino, the walker is pulled along the 800 km (or 1000 or 1400, or whatever) by the promise of a grand entrance into Santiago, buoyed by the community of pilgrims, of which she is a member the moment she starts on the Way. South West Coast Path has neither the spectacular end marker nor a community bound by a common goal.

Once the first flush of a new adventure has worn off, walking, then walking some more, then again the next day and the day after…it gets to you, it’s hard. When refracted through sprained knees and strained shoulders, scenic beauty fails to inspire. As Raynor Winn writes (in the delightful Salt Path, Penguin, 2018) it’s just ‘up and down and down and up and blue and green, and blue green, blue, blue, green green, blue…’ endlessly on and on.

‘I came so far for beauty

I left so much behind

My patience and my family

I thought I’d be rewarded

For such a lonely choice’

I played Leonard Cohen’s ‘such a very hopeless voice’ over and again in my head.

Those who read the earlier ‘Camino addict’ blog might recall, that on day 13, of our walk on the SWCP, we stumbled into Morwenstow and found ourselves in a ‘free house’ once used by pilgrims on their way to the port town of Fowey, from whence they set sail to Northern Spain.(see https://readingontheroad54893552.wordpress.com/2019/07/12/camino-addicts-notes-from-uks-south-west-coast-path/).

The Saints’ Way crosses Cornwall from Padstow in the North to Fowey in the South. It has its own Camino ‘passport’ with Fowey as the final stamp. This route is less than 50 km long and there is no record of any medieval pilgrim having trudged 420 km along the coastline (that is, the SWCP), just to take the scenic route to Fowey. But then again, all over Europe new Camino Ways are being found, recovered, re-invented. So why not the Camino Coastal Cornwall?

The real work of long distance walking is done by your head – legs are incidental. And the idea of a Camino to Fowey works to re-set my mind to the task.

Leaving Morwenstow we climb over the highest cliff of the Cornish Coast, passing Higher Sharpnose Point, stopping to take the obligatory photo of this little diversion. It is not a path that anyone needs to actually traverse – just a bit of bravado for one’s social media. 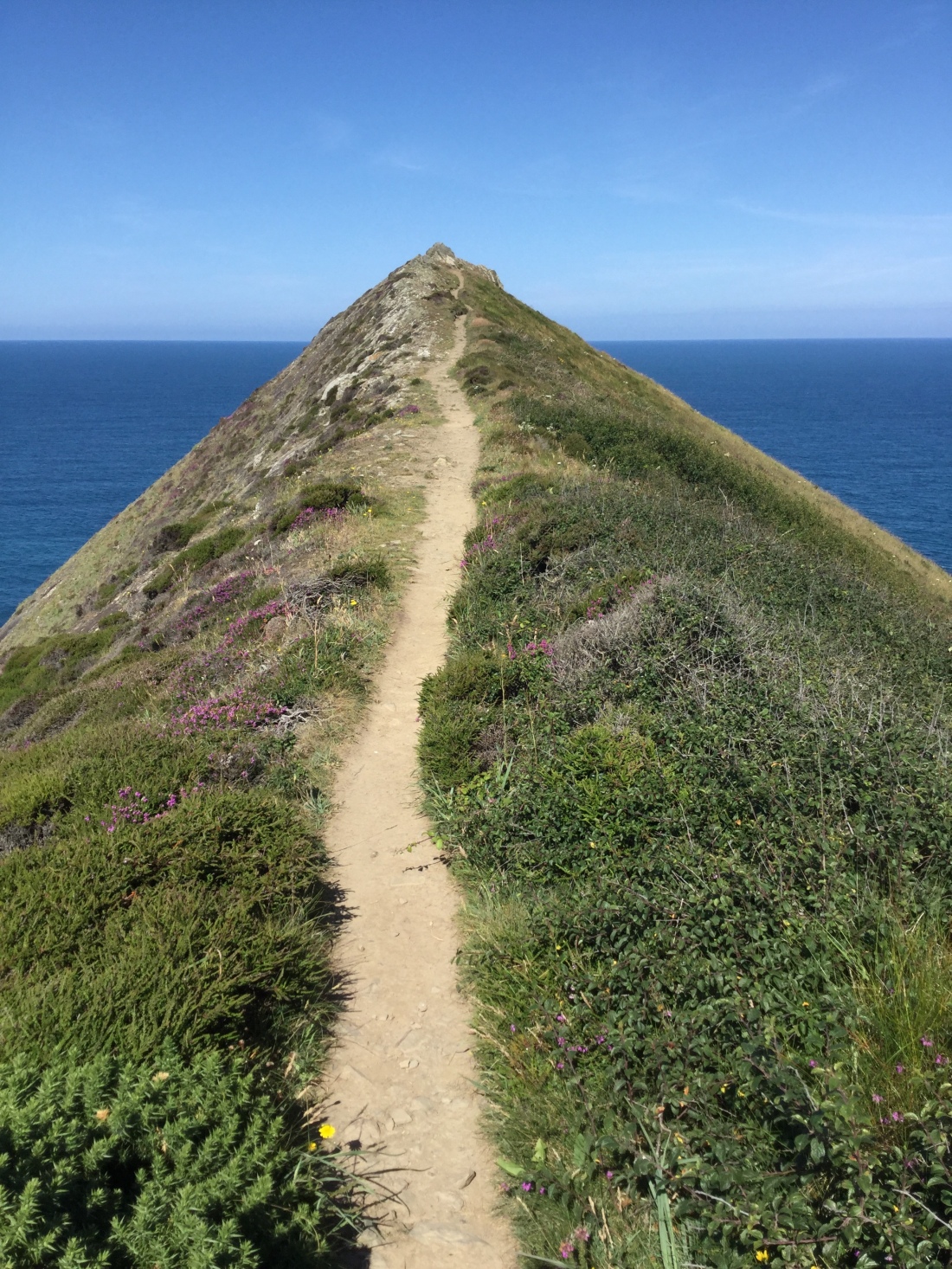 Often, our path brings us into tourist destinations; mostly we miss the attractions. When you have walked anywhere between 5 and 8 hours, there is little time and less will to chase up those special sights. We are a bit fazed when on the long climb down to Tintagel (King Arthur territory, see https://www.theguardian.com/uk-news/2019/aug/08/controversial-and-late-tintagel-footbridge-in-cornwall-to-open) two well-dressed women ask us for direction to the ‘viewing point’. Anywhere really, I want to say, just look around.

Since Hartland Point, the ocean has been almost continuously by our side, somewhere just below the cliffs. Our soundtrack: its incessant lunges onto the shores, and

Retreating to the breath.’ (As in Matthew Arnold’s maddeningly perfect verse).

Now and then birds hit a high note rising above the water’s groan. Nearer the beaches the gulls and the motor boats out-screech each other.

Just 6 days after Morwenstow, my Camino idea, farfetched as it was, had so receded that I even forgot to visit Saint Petroc’s Church where the Saints’ Way officially starts. We didn’t get in till 4 p.m. and we had 20 km to do the next day. St Petroc didn’t put his Church quite in my way, so he’ll have to do without me.

But the following Sunday, half way between Hayle and St. Ives, the path, marked with the Camino shell way-marker, passes right through the grounds of St. Uny’s church, Lelant. Another Camino, St Michaels Way, officially opened by the Spanish Ambassador in 1994, starts from here, crosses the narrowest section of Cornwall, just 13 km to end at St Michael’s Mount.

On the SWCP, it is five days before we get to the Mount, where a biblical vision unfolds daily: the ocean parts, literally, as water pulls away to the east and the west, revealing a narrow 500 metres long land bridge from the small village of Marazion to the tiny tidal island, St Michael’s Mount. Every evening through summer, tourists with fine cameras take time-lapse shots of the ocean closing over the path, evidence that the oceans didn’t just part for Moses.

We get to Fowey nearly 6 weeks after we started at Minehead and more than a month after I learnt about the Camino connections at Morwenstow.

The volunteer at the Information Centre gushes about Fowey’s newly discovered Camino status as the final port in UK o. Most exciting, some pilgrim documents have been found in the basement of ‘Number 9 South St’ right in the centre of town! Of course, she loved the film and of course knows someone who has done the Camino and so on. ‘In the hey day of the Camino,’ the town’s tour guide says, ‘three dedicated ships sailed continuously between Fowey and ports in Northern Spain.’ Then with amazing precision he adds, ‘the trip cost 7 shilling and 6.’ How do you know, I ask. ‘Osmosis’, he says, ‘We are learning a lot about the Camino Santiago lately’…

We take a ferry out, 2 quid, and 10 minutes across the mouth of River Fowey to Polruan and keep walking. 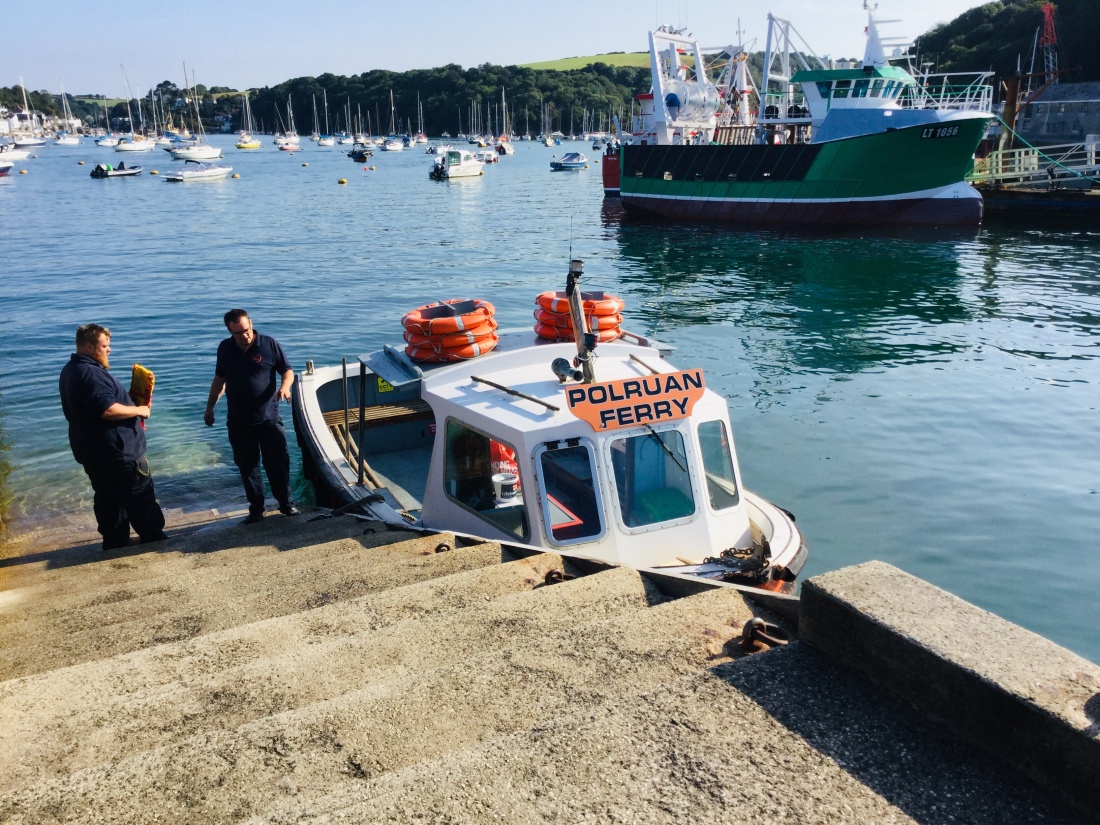 Indian by birth. Traveller by choice. Retired academic by accident. View all posts by readingtheroad

6 thoughts on “Cornwall Coast: Notes from a Camino Addict II”