“Much has been written of travel, far less of the road. Writers have treated the road as a passive means to an end, and honoured it most when it has been an obstacle;” (Edward Thomas, 1913)

We walked the South West Coast Path (SWCP) in UK for two months, almost every day, though we set no record for speed or distance. Gale-force winds and squall forced us to abandon the last two kilometres into Portloe (day 36) and again the last five into West Bay (about 2 weeks later). We cut out the walks in and out of the big cities, Plymouth and Torquay – walking by the side of a sealed vehicular road is no fun at all!

So I guess we don’t qualify for the End-to-End certificate which the SWCP Association hands out to those who have walked the ‘whole’ 630 miles, i.e., 1014 kilometres.

Minehead, where the path officially ‘starts’, is not quite the pits. Nor has it anything to do with mines! The name is an English corruption of an old Welsh word Mynydd, meaning mountain. English chews up other languages. We Indians know that well. Under English reign our Kolikata became Calcutta, Dilli became Delhi. We re-wrote our greatest poet’s name: Tagore in place of Thakur. But I don’t think I would have come to Minehead just out of linguistic solidarity. And really, I can’t think of a single good reason to come here. We came only to chase this footpath, several hundred kilometres down, to an entirely forgettable sandy spot just past a nudist beach somewhere in the south of the United Kingdom!

Our nomad’s life — a different bed each night — ended at Lulworth Cove, where two rocky arms reach out from the earth to hold a fragment of the ocean in a circular embrace. There being no accommodation available along our track past this point, and having secured a B&B in Corfe Castle whose lovely owner was willing to ferry us to and from the path, we resolved to do the final 50 or so kilometres at a leisurely pace as four half-day walks.

A few miles along from the hyper-touristy Lulworth Cove Village, above the drowsily quiet Tyneham Bay, Walking Buddy (WB) settled into his now habitual mid-way siesta, and I was absently musing ‘How do I love thee, let me count the ways’ – addressing SWCP of course, NOT WB! 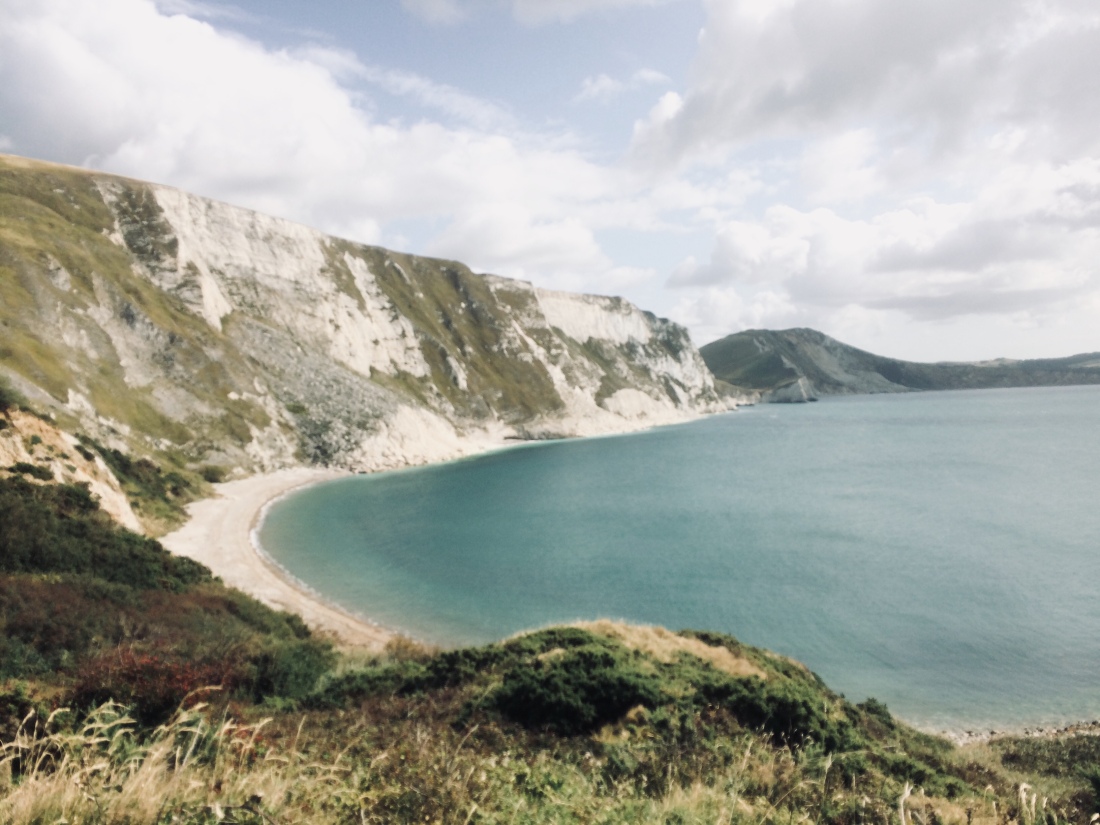 A bird of prey soared into view from the rocks to our left. Bird-watchers had told us to look out for kestrels around here. If we are lucky we might even see a peregrine falcon. Three flaps of the wing took the raptor up into the glare of the mid-afternoon sun and beyond my iPad camera’s reach. Then it stopped dead in the sky. Two helicopters flew past (not unexpected, here the path borders a military training area). The bird held its place undaunted. Then it swooped, rose again almost immediately, floated like a feather, fluttered so fast that its wings disappeared and for a split second it looked like a giant dragon fly. It rested on the wind for what seemed like an impossibly long time. Finally, at lightening speed it darted towards the earth, straight as an arrow and disappeared from sight past the last visible cliff.

In its dramatic war dance, the falcon seemed to sketch a microcosm of our path across the sky: a thin line between the infinite blue to our right and the strange shapes of the land to our left, it rises and falls, sometimes edgy and rapid; elsewhere it arcs gently and then plateaus and slides quietly down a paddock.

From Minehead, the trail drifts west, at first through the ancient woodlands of the Exmoor National Park, on and off the strangely flat-topped ‘hogback’ hills. It flattens on reaching Devon’s muddy river banks, then becomes increasingly rugged as it nears Cornwall. In North Cornwall the track scales some of the highest cliffs of the Atlantic coast and plunges down to the sandy beaches, again and again, determined to test the walker’s will. Here a hundred or 200 metre climb five or six times in a row is all in a day’s walk. 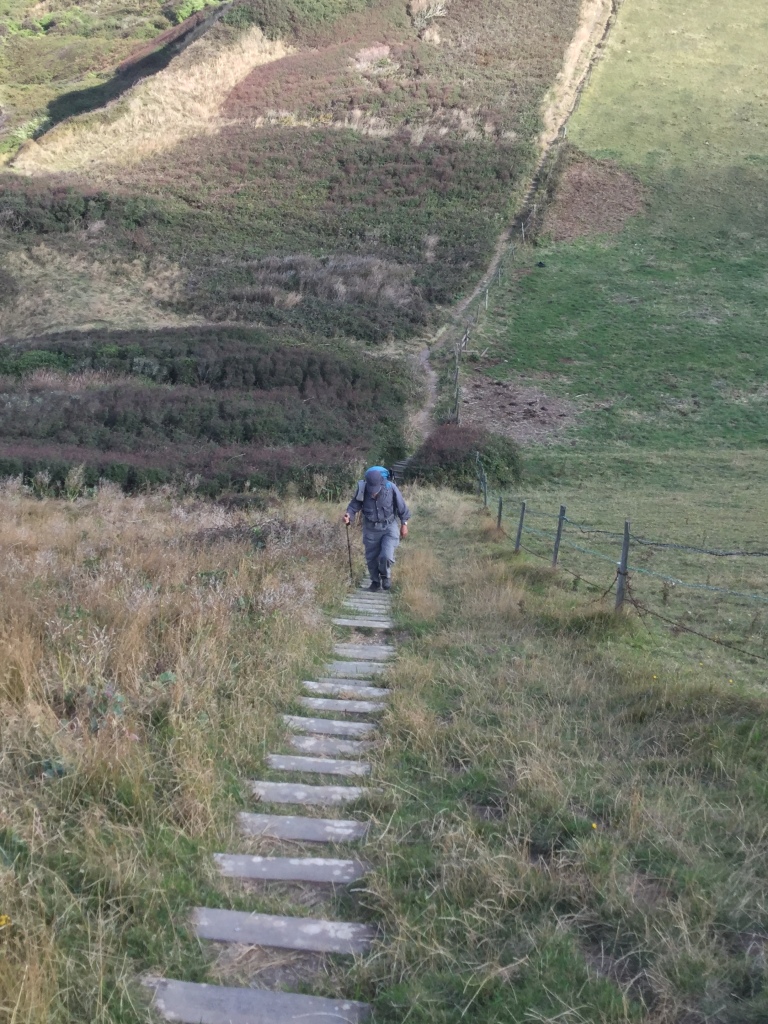 If you have never climbed a hundred meters, then imagine taking the stairs up a 35 storey building, then imagine those steps are 10 inches wide, slippery, broken and there are no hand-rails. Now climb down those same steps and up 45 storeys… there are no lifts and your bedroom for the night is still three sky-scrapers away.

Land’s End is as far west as you can go, so tourists are here in droves. At dusk the inflatable theme-park wallahs roll up their plastic and most visitors leave with their kids and dogs. The sun sinks into the clouds somewhere between the Cornish west and the Canadian east. There is no landmass in between. 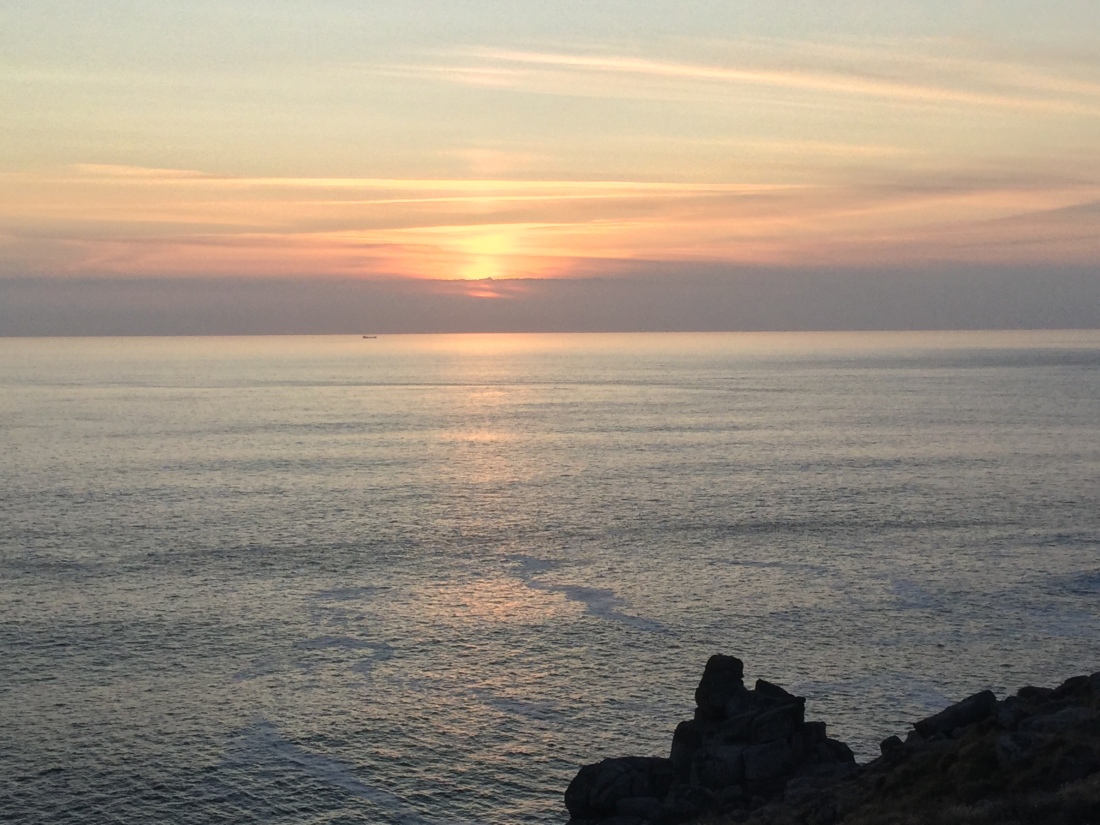 From here the path turns south to The Lizard (nothing to do with reptiles, something Cornish to do with heights), the most southerly headland of UK. The nearest car park is nearly a kilometre away, and the only way to get to the cove is on foot. From here the path turns right back, heading east again. The water to our right for the rest of the way is the English Channel.

As the track turns first south and then east, there is a subtle change in the terrain: the south coast is just a little less craggy. The razor-sharp angular slate shapes of the north coast begin to give way to gigantic stone eggs, cakes and mushrooms! The hills get greener and rounder still as the path reaches South Devon. Finally, in Dorset, the dramatic rocks of the Jurassic coast, red, gold and white, rise in straight walls from pebbly beaches below. This land is fragile as it is beautiful.

A hilarious Bengali satire (Ulat Puran, Re-Versed) imagines what might have been had Indians colonised Britain. I’m pretty sure that under Indian rule, the South West Coast Path would have been filled with Hindu pilgrims. I can see temples and deities rising from the deep. On the soft red sandstone above a beach in South Devon, someone must have carved the profile of a giant Jagannath, the arm-less Lord of the Universe. The Durdle Door (already a tourist Mecca) is undoubtedly the head of the elephant god making waves by sucking up and blowing out the sea in his trunk.

About five kilometres before the little blue marker where the SWCP formally ends, a less arcane signifier: white sandstone palms rise toward the sky in gratitude or perhaps a salutation.

Soon the path disappears into a long white sandy beach, like the one near my house on a far-away coast in another hemisphere. I kick off my boots, shrug off the hike and splash through the lapping water for the home stretch.

Starting and ending unceremoniously, as it does, the South West Coast Path underscores perhaps, that a road is more than any or even the sum of all the places it takes you to; that destinations might be less important than the means and methods we use to get there; that in life as on a hike, the journey is all that matters, the end is neither here nor there.

Indian by birth. Traveller by choice. Retired academic by accident. View all posts by readingtheroad

15 thoughts on “Last Post on the Path to Nowhere”